Carlos Lopez-Real was our special guest tonight and the gig finished with shouts of More, More. He is an in-demand saxophonist, composer and educator based in London. His current bands are Mandorla, featuring guitarist Justin Quinn,

a quartet with young singer Fini Bearman, and a new quintet collaboration with Brigitte Beraha and Will Collier. In addition to jazz, his writing is influenced by classical composers such as Steve Reich and John Adams, the singer Bjork and North  Indian improvised music.  He is the founder of e17 jazz, the East London-based collective spawned out of both F-IRE and LOOP associations. After Oxford University and the Guildhall School of Music, he then studied with David Liebman in New York.

He was accompanied by the Roger Odell Jazznights Trio comprising Roger Odell (Shakatak founder member and drummer) on drums, Chris Ingham (of Rebop) on keys and Bernie Hodgkins on his 5 string double bass.

The evening opened with the Jazznights resident songbird Larraine Odell who gave us a very sensitive rendering of Cole Porter’s Love For Sale which featured Chris Ingham on keys. A very individual version of Buddy Kaye’s I’ll Close My Eyes 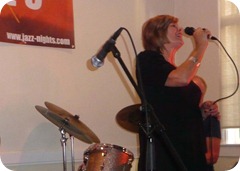 followed with a great solo on bass by Bernie. The third number from Larraine was Jimmy Van Heusen’s It Could Happen To You with 4 bar breaks by Roger & Bernie. You’re  My Thrill, a 1933 popular song, composed by Jay Gorney, with lyrics by Sidney Clare and was Doris Day’s first LP album in 1949. This was a new song for Larraine and we are a sure it will become one of her standards. Too Close For Comfort was a very apt up tempo ending to Larraine’s set  – this and most of the songs were arranged by Roger. 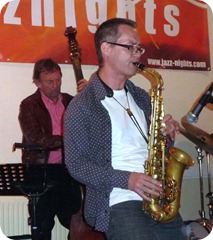 dard: Alone Together with Carlos straight into an extended solo, Chris & Bernie then took over the solo spots. John Coltrane’s (I always think of it as Coltrane’s but it was actually composed by Victor Young & Jack Elliott) You’re A Weaver Of Dreams followed leading in to Nostalgia  In Times Square by Charlie Mingus is a 12 bar blues with differing harmonies and was played by Carlos to great effect using the lower registers of the Alto – at times, the effect was as if it had been played on a tenor! This Mingus number is fitting of course for a featured bass sol and Bernie certainly excelled at that. Carlos finished that with a contrasting solo in the upper registers of the Alto.

Following the interval the Jazznights raffle was followed by the traditional sitting in spot.. Geoff Harriman on harmonica and Will Jarmen on drums playing a medium tempo Johnny Mercer classic Autumn Leaves. Steve Laws playing a vintage 1922

Conn alto sax  which gives a much richer and punchier sound than his Selmer mark IV played John Coltrane’s Mister PC, this was again accompanied by Will Jarmen on drums together with Chris on keys and Bernie on bass

Carlos opened his second set with Oleo which is a Bebop composition by Sonny Rollins, written in 1954. It is one of the most popular pieces to feature rhythm changes. 8 bar trades diminished to 4 bar trades by Carlos, Chris & Roger. Next was an instantly arranged version by Carlos of Secret Love – not quite the same as

the Doris Day version from the film Calamity Jane in 1953! Carlos then reached for is soprano sax with a lovely rendition of You Don’t Know What Love Is. Back on Alto Carlos played Cedar Walton’s most famous Bolivia.

An all too short second set climaxed and very unfortunately ended far too quickly with Ellington’s Caravan ( I always think of it as Ellington’s but it was composed by Juan Tizol and was first played by Barney Bigard in 1936, the year before Ellington’s recording). A bass intro followed by keys and drums led into Carlos’s first solo before Chris Ingham took over with a heavy left hand emphasising the Caravan theme which lead into Bernie on bass. It was a fitting ending to the gig which the extensive technical ability of Carlos. He is a lovely player and it was so evident that all the band thoroughly enjoyed the gig.

After all the justified plaudits, just one small criticism – a longer solo by Roger would have been nice rather than being just featured in the breaks – but so what!. A wonderful evening

For future gigs at Jazznights go to www.jazz-nights.com

Nigel first came to prominence as a member of the jazz funk group James Taylor Quartet but since then he has also played regularly with the Ronnie Scott’s All Stars as well as touring with his own organ trio. “One of Britain’s finest players on the six strings . . . he’s a legend in the making” – Griff Prescott.

Nigel is now a well established member of the jazz community and is an in demand sideman as well as leading his own groups, preferring the organ, drums

The evening opened with the resident Jazznights Trio  which tonight featured Roger Odell on drums, Simon Brown on keys and Bernie Hodgkins on his 5 string double bass. Together with Larraine Odell on vocals giving us (sadly only three) great numbers:
1 Harold Arlen’s 1932 “I’ve got the world on a string”
2 Gershwin’s “Isn’t it a Pity” – this is a personal favourite of ours by Larraine and was composed by George Gershwin, with lyrics by Ira Gershwin, written for the 1933 musical Pardon My English.
3  “Comes Love” (Nothing Can Be Done” featuring Bernie on bass with Roger featuring the brushes – a lovely version

Nigel Price started his first set with Alone Together, a senuous opening unaccompanied solo led to an up tempo number accentuated by a commanding beat from Roger Odell with solos from Nigel Price, Simon Brown and Bernie Hodgkins. The  Bossa Nova Triste by Antonio Carlos Jobim followed and was 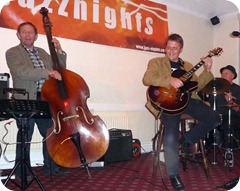 again accentuated by Roger’s Brazilian bossa beat. Duke Ellington’s 1938 Prelude To A Kiss with a lovely unaccompanied introduction from Nigel. The first set ended (all too quickly) with Jerome Kern’s All The Things You Are. It was written for the musical Very Warm for May (1939) and was later featured in the film Broadway Rhythm (1944). Nigel again gave a very slow noteworthy intro leading into very fast middle and final sections which featured alternating 8 bar breaks between Simon, Nigel and Roger leading  in to a barnstorming finish.

The second set began with the traditional Jazznights sitting in spot which tonight featured Geoff Harriman on Harmonica and Will Jarmen on drums playing a very soulful and wistful version of Somewhere Over The Rainbow. A first for tghe sitting in spot was soprano Anna Kennedy from the USA who sang Ellington’s I’m Beginning To See The Light followed by, in Anna’s words an emblematic song from the states by Janis Joplin called Oh Lord Won’t You Buy Me A Mercedes Benz, Anna opened the song with an a capella intro.

Nigel’s second set opened with Clifford’ Brown’s Sandu – a great blues in E flat. Next was the ‘dark tune’ Invitation with its many minor chords beautifully played – allegedly requested by Simon Brown!. Bernie Hodkins suggested Richard Rodgers “Have You Met Miss Jones?” – a song that was written in 1937 for the musical comedy, I’d Rather Be Right. This was a superb melodic version featuring 12 bar breaks that decreased to 8 bars by Nigel, Simon and Roger. The great ballad Body And Soul again commenced with an unaccompanied introduction. Because of its complex chord progressions, “Body and Soul” remains a favourite of jazz musicians. The unusual changes in key and tempo are also highly attractive and provide a large degree of improvisational freedom and all the band really enjoyed that one.

The very rhythmic “Anthropology” is a bebop-style jazz composition written by saxophonist Charlie Parker and trumpeter Dizzy Gillespie from 1945. Like many other jazz compositions, it utilizes the chord changes known as “rhythm changes”. It was unfortunately quite a short number due to time limitations – another 30minutes of that Anthropology would have done very nicely! A wonderful finale for a  glorious gig. Nigel is a fantastic guitarist – come back soon to Jazznights.

For more details of Jazznights and future gigs go to www.jazz-nights.com – see you there!