Christine Tobin’s sound is rich, authentic and deeply expressive and was described by the Guardian as “Tobin’s 24 carat voice” while praising her both for the poetry of her compositions and her golden voice. Much of her repertoire is self-penned and Tobin has received many accolades for her skills as a writer and arranger. Romantic and radical, Christine is a musical free spirit who blurs the lines to create her own unique style that is streetwise and eclectic. In 2008 she was named Best

Vocalist at the BBC Jazz Awards.

Her versatility and musical integrity has ensured that she is a much in demand guest with other bands. She has been invited to record and work with a long list that includes: Billy Childs, BBC Big Band, Mike Gibbs, Django Bates, Kenny Wheeler, Nigel Kennedy, Billy Hart, Julian Arguelles, Tim Garland, Gary Husband, Phil Robson, Liam Noble, Hans Koller and a performance of a Bessie Smith song in the Mike Figgis directed film, ‘Red, White & Blues’, produced by Martin Scorsese.

Phil Robson is a guitarist/composer based in London , UK . He is internationally

regarded as a highly versatile and creative player who appears in all kinds of diverse settings.

Members of The Jazznights Trio & vocalist tonight are:
Roger Odell – drums
Roger was one of the founder members and drummer with the jazz-funk group Shakatak, Roger has toured internationally and recorded numerous CDs, which he continues to do on a regular basis to this day.

Simon Brown – piano
A very respected and popular jazz pianist who is equally known for his arranging skills. He is always in demand to play many gigs with other bands when he is not teaching jazz piano or playing with the  Jazznights Trio
Dave Olney – bass
Apart from his superb jazz accompaniments he has been a resident musician on both Parkinson and Strictly Come Dancing. including Rod Stewart, Ronan Keating, Dionne Warwick, Elaine Page. Elton John as well as Sooty & Postman Pat
Larraine Odell – vocals
Larraine possesses a unique smouldering tonal quality and a subtle jazz phrasing style that has elicited great praise from two of her own vocal mentors, Mark Murphy and Sheila Jordan

The Jazznights resident songbird; Larraine Odell opened the first set with a wonderful selection from Close Your Eyes, When Sunny Gets Blue. Love For Sale to a superb samba by Milton Nascimento Nothing Will Be As It Is accentuated a solid beat from Roger Odell. All songs in this set were skilfully arranged by Roger Odell. 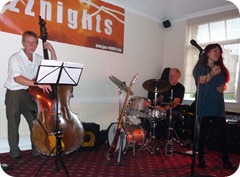 Christine Tobin opened with a stunning extended version of "You Go to My Head", a 1938 popular song composed by J. Fred Coots with lyrics by Haven Gillespie. This was followed by great rocky version of the Rodgers & Hart tune: “I didn’t know what Time It Is” featuring solos from Simon Brown and Dave Olney. The Brazilian “Corcovado” (or in English:Quiet Nights Of Quiet Stars) by Antonio Carlos Jobim was sublime. To end the first set of the evening a very bight version of Jerome Kern and Johnny Mercer’s “I’m Old Fashioned”

The second set commenced with three numbers from Christine’s  new album “Tapestry Unravelled” this is a beautiful and elegant re-working of songs from Carole King’s beloved classic 1971 album Tapestry plus one original number. The first number was “Home Again” which was a masterpiece with Christine’s bluesy voice. The simplicity of  “It’s Too Late”, the second of the three songs was sun g with perfect ease and was a real delight. The third number (unfortunately, because we would love to hear the whole album) was “Just Call My Name”

Phil Robson then joined Christine and the Trio with Jerome Kern’s “Yesterdays” – not the Beatles version! Antonio Carlos Jobim’s “Meditation”  followed sung and 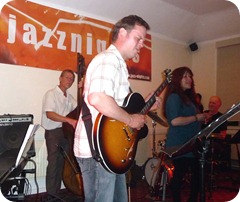 played with great feeling. Next wasanother real pleasure to listen to: "Afro Blue" is an afro-cuban  jazz standard with a complex, smooth-sounding beat composed by Mongo Santamaría, perhaps best known in its arrangement by John Coltrane. Superb accompaniment from Phil and the trio.

The set finished with Bill Carey and Carl  Fischer’s “You’ve Changed” (the tune often remembered from the 1961 recording by Dexter Gordon) provided a superb sensitive solo from Phil Robson. How did the evening go so quickly?

A gig to remember! 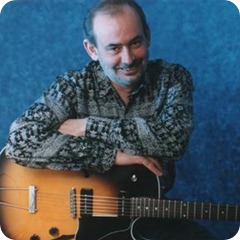 Formerly from the local area, Mick moved on to establish himself as one of the major players on the UK jazz guitar scene with his duo performances with Dave Newton and in the trio Organic Matters. His forte is hard-swinging, straight-ahead jazz with a contemporary Blue Note school approach.

Mick Hanson is one of the UK’s leading exponents of jazz guitar. His unique style is a masterful fusion of his early blues roots with the honest swinging jazz of the 50’s and 60’s. Mick has worked and recorded with many of the worlds best known performers including Eddie ‘Lockjaw’ Davis, Dick Morrissey, Brian Dee, Gordon Beck and Dave Newton, and recorded two critically acclaimed albums as a leader.

Mick will be accompanied by the Roger Odell Jazznights Trio. Larraine Odell will open the gig with her 30-minute set of vocal standards. The mid-evening sitting-in spot is open to all.

Admission: £7 (£4 students) Ticket sales: At the door.
There is a special rate of £45 per room for those wishing to stay over for the night (excludes Bank Holiday weekends) and excellent food is available – order at the downstairs bar and it can be delivered to your table.

Unfortunately we will be away again and unable to attend this gig. If any one  would like to send us any notes or reviews on the gig, it would be appreciated. Email dancerp@gmail.com

For further details go to www.jazz-nights.com