What a great gig with the vibrant and charismatic performer on all 4 sax’s from Soprano to Baritone, Derek Nash is equally at home leading the award winning Jazz ensemble Sax Appeal to Funky Heights, or swinging his way to best CD of the year 2000 with Spike Robinson. As a full member of the Jools Holland Rhythm and 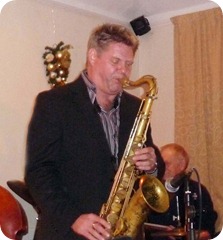 Blues Orchestra, he has performed in front of 65,000 people at the Millennium Stadium in Cardiff & also to over 100,000 at the Glastonbury Festival. He has appeared live & on TV with with many top performers including Eric Clapton, David Sanborn, Tom Jones, Paul Carrack, Jamie Cullum, Mavis Staples, Will Young, Ruby Turner and Sam Brown.

Last night he was performing at The Royal Albert Hall with the Jools Holland Band and the following night he was here at Jazznights in Clare, Suffolk

Derek was accompanied by the Roger Odell Jazznights Trio which included:

Roger was one of the founder members and drummer with the jazz-funk group Shakatak. Roger has toured internationally and recorded numerous CDs, which he continues to do on a regular basis to this day

Bernie Hodgkins – double bass
Inspired by an uncle, who played and recorded with Django Reinhart and Stephane Grappelli in the legendary Quintet de Hot Club of France, Bernie grew up in a Jazz-oriented family. Their influence led him to become a respected bass player behind such people as Matt Munroe, Dickie Valentine and Dennis Lotus, in the early stages of his career. Bernie is particularly acknowledged as being one of the few players to bring an authentic, driving jazz feel to both the double

bass and the bass-guitar, and for his fluent and creative soloing
Andy Noble –Keyboards
Andy regularly plays with the Albert Garza Trio, Ben Greenslade-Stanton Fuerza, Carl Orr’s Dangerfunk and the Jazznights Trio as well as other bands in and around London and East Anglia.
and
Larraine Odell – vocals

Beginning her professional singing career with the group CMU with whom she recorded two albums, Larraine performed at numerous venues throughout the UK and Europe, including the Purcell Room, RFH, Boxford Fleece & Ronnie Scotts. Larraine possesses a unique smouldering tonal quality and a subtle jazz phrasing style that has elicited great praise from two of her own vocal mentors, Mark Murphy and Sheila Jordan.

Larraine opened the first set with the 1945 Rodgers & Hammerstein song – It Might As Well Be Spring, Richard Rodgers says that he wrote the number at a bright tempo and this is how Larraine performed it with a real swing to it. A personal favourite came next On Green Dolphin Street with lyrics by Ned Washington. This was played and sung by Larraine with an unusually slow tempo intro moving into a medium tempo which illustrated her flexibility and great styling. Although Mark Murphy made this very popular vocally, Larraine made it her own. Andy Noble & Bernie both gave solos. 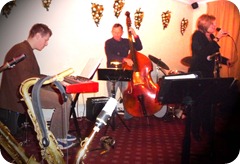 Night and Day by Cole Porter followed, this was written for the 1932 musical play Gay Divorce was a very swinging up-tempo again with a very “drummy” version by Roger Odell. For Heaven’s Sake which Billie Holiday featured on her Lady In Satin came next as a very  sensitive number by Larraine. Bernie’s solo echoed this sensitive element Too Close For Comfort which was a lovely ending to Larraine’s set. All arrangements were by Roger Odell

Sonny Rollin’s Doxy opened Derek Nash’s first set on tenor in B flat  featuring all the band members including trades between Derek and Roger on drums. Derek pointed out that temperature can radically effect the tone of tenors and as this was a very cold night, tuning could be a problem – it wasn’t!  Derek switched to Baritone for Ellington’s (or was it Strayhorn?) Morning Glory in a slow foxtrot tempo. This was

superb and a tune that is not played enough these days.

Voodoo Rex  – Derek’s own composition came next which is featured on his next album due out in JANUARY 2011. Derek was playing his Steve Goodson Voodoo Rex Alto Sax. It was played in a real New Orleans style – you could sense the influence of the old New Orleans Marching Bands. This gave Roger a real workout on the drums and this featured trades between Derek and Bernie on his five string double bass.

Little Darlin’ or Li’l Darlin which was featured by Count Basie followed  with Derek on Soprano (Alto, Tenor and Baritone had already  been featured on this short first set by Derek). This is usually played in a slow way – but not this time. I was going to

say in an up-tempo way but it was just fast! Derek started, Andy and Bernie followed with a great solo from Roger. To think that last night he was playing in the Royal Albert Hall with Jools Holland and tonight we had a relatively small audience, no doubt due to the very cold and very icy weather – but they missed a real treat. Here endeth the first set.

After the interval we had the Jazznights raffle which again offered three CD’s and a bottle of French Merlot. This was followed by the traditional Jazznights sitting in spot which is open to all musicians – amateur or professional who have an  opportunity to play with the Jazznights Trio. Firstly Will Jarmin took to the drums. Will started

playing drums at the age of 12 in 2001, since then he has played in numerous local bands and achieved grade 8 on the drum kit. After achieving a BA (Hons) in Music at Colchester Institute, Will is teaching and performing in various Jazz, Rock, Folk and Funk groups. Since starting drum lessons, Will has studied a wide range of techniques and styles including rock, funk, jazz and Latin. He plays percussion, including Congas and Bongos, and holds a valid CRB check certificate. Will was joined by Harry Green , a thirteen year old local boy who tonight brought along his tenor. Harry is also very proficient with the alto as well as guitar in

which his forte is blues. They were all joined by Derek Nash on Hank Mobley’s 1960 Soul Station. This was originally played by Hank in the hard bop idiom and tonight’s rendition followed that tradition. Again all members of the band had their opportunity to join in. Such is Derek’s practice to involve every one into the music..

The second sitting in spot featured Bill Sharpe on keys who together with Roger Odell were founders of the Jazz funk Shakatak in 1981. This was a very welcome and great surprise. Bill and the rest of the band together with Derek Nash went straight into Mile’s Davis’s All Blues which of course was originally featured on Miles seminal album “Kind Of Blue”. Bill gave us a great solo which left us wanting more. Incidentally, Shakatak

will be playing two gigs at Highbarn in Great Bardfield on the 14th and 15th of January 2011.

Andy retuned to the trio for the next number which again is featured on Derek’s next album due out in January a Derek Nash composition called Majolica. Derek played soprano and again all the band were featured. A Bossa Nova followed which was a composition by Derek and his father – Haunting Me was

played on the Baritone. Both Derek’s father and mother were present at the gig as they were at last nights performance at the Albert Hall.

Derek invited Harry Green to the floor again for the final number of the evening – Charlie Parker’s 1945 Billie’s Bounce in F which was played at a cracking pace and included trades between  Derek, Harry and Roger on the Drums. How could this evening go so quickly. Derek is a master musician and a real gentleman. If you get the chance to see Derek – don’t miss it.

For further information and gigs go to www.jazz-nights.com

Christian is one of the most lyrical and soulful alto players to have emerged from the UK in recent years. Loved for his melodic playing and pure tone, he has risen to

prominence on the British jazz scene. He is now a regular at London’s prestigious Ronnie Scott’s and both he and his band are in great demand.

Christian studied at Leeds and The Guildhall School of Music. However, the defining musical inspiration came from playing alongside Julian Joseph and the Mondesir brothers at Ian Carr¹s jazz London fusion orchestra.

"..a truly superlative debut,the standard of playing is phenomenal.Brewer is a superb alto saxophonist and

"..A Phil Woods-like accuracy on fast tracks combines with a soul-searching Art Pepper quality to his ballad playing.." – Jazzwise magazine

"He is a remarkably fluent and craftsman like improviser" – Jazz UK

Brewer himself is a passionate, gutsy player with what Ian Carr accurately describes as a ‘glowing, lyrical sound’ infused with abrasive pep

Go to http://www.jazz-nights.com for further details