A welcome return to Jazznights – always a great favourite. Born in 1975 in Milano, Italy Tommaso started playing the saxophone and studying music at the age of 18. He moved to the United Kingdom in 1994 where he graduated at Birmingham

Conservatoire with a Bmus first class honours and later at the Guildhall School Of Music and Drama with a Postgraduate Degree in jazz studies in the year 2000. He has performed with some of the most respected jazz musicians including Billy Cobham, David Liebman, Kenny Wheeler, Stan Sulzmann, Jim Mullen, Jonathan Gee, Paolo Pellegatti, Gianni Giudici. In the year 2004 he collaborated with award winning oscar film composer Dario Marianelli ( ‘Pride and Prejudice’ and ‘ The Atonement’ ) recording music for ‘This Little Life’, a BBC drama for Channel Four.

Tommaso is making a name for himself on the British jazz scene, He has worked with some of the biggest names in jazz, including Jean Toussaint (ex-Jazz Messengers) and David Leibman to name but a few and has performed in many jazz clubs and festivals.

The Roger Odell Jazznights trio opened the evening with 4 excellent vocals from the resident songbird Larraine Odell. The trio were: 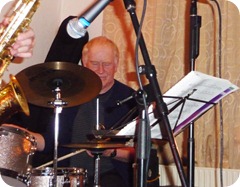 Roger was one of the founder members and drummer with the jazz-funk group Shakatak. Roger has toured internationally and recorded numerous CDs, which he continues to do on a regular basis to this day.
Simon Brown – piano

A very respected and popular jazz pianist who is equally known for his arranging skills. He is always in demand to play many gigs with other bands when he is not teaching jazz piano or playing with the  Jazznights Trio
Bernie Hodgkins – double bass
Inspired by an uncle, who played and recorded with Django Reinhart and Stephane Grappelli in the legendary Quintet de Hot Club of France, Bernie 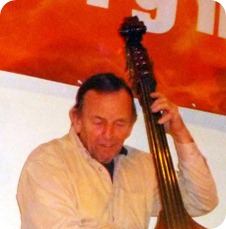 grew up in a Jazz-oriented family. Their influence led him to become a respected bass player behind such people as Matt Munroe, Dickie Valentine and Dennis Lotus, in the early stages of his career. Bernie is particularly acknowledged as being one of the few players to bring an authentic, driving jazz feel to both the double bass and the bass-guitar, and for his fluent and creative soloing. 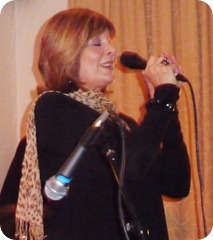 Larraine Odell – vocals
Beginning her professional singing career with the group CMU with whom she recorded two albums, Larraine performed at numerous venues throughout the UK and Europe, including the Purcell Room, RFH, Boxford Fleece & Ronnie Scotts. Larraine possesses a unique smouldering tonal quality and a subtle jazz phrasing style that has elicited great praise from two of her own vocal mentors, Mark Murphy and Sheila Jordan.

Larraine opened the first set with with the Richard Rodgers and Lorenz Hart’s 1939 I Didn’t Know What Time It Was. For historians this Rodgers and Hart song was introduced by Benny Goodman, with vocalist Louise Tobin, on the Columbia label on September 13, 1939. A Medium tempo number which also featured 4 bar trades between Roger on drums and Bernie on his 5 string double bass.

A stunning version of Cole Porter’s I‘ve Got You Under My Skin followed from Larraine .This was  totally new arrangement by Roger Odell with just Roger and Bernie opening leading into the trio. Roger just used the mallets (both ends) and the bass drum. Larraine produced a wonderful floaty sound at half the tempo of the band. Quite unique – Roger deserves much more credit as an arranger. Larraine’s next song was For Heaven’s Sake which Billie Holiday featured on her Lady In Satin recording came next as a very  sensitive number by Larraine.

Just In Time by by Jule Styne with lyrics by Betty Comden and Adolph Green ended Larraine’s set with just the voice and the bass opening leading into a solo from Simon and Bernie and Roger playing together. A wonderful set.

Tommaso Starace (from the Blue Note club, Brecon Jazz Festival to Jazznights!) opened his first set with the 1926 Ray Henderson song Bye Bye Blackbird. An up-tempo solo from Tommaso led into solos from Simon and Bernie. Italian saxophonist Stefano di Battista’s Nico’s Dream followed with another up-tempo version and an extended solo by Tommaso who managed to play his Alto sounding

at times like a soprano as well as a tenor – a truly gifted musician.

Unusually the first set ended with a ballad – Ellington’s In a Sentimental Mood with an unaccompanied solo  from Tommaso in which he produced a very breathy sound from his alto – Ben Webster came to mind but Tommaso gave it his own sound. 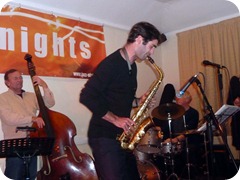 After the interval we had the Jazznights raffle (prizes of 3 cd’s and a bottle of wine) leading into the traditional sitting in spot which is open to all musicians who have an  opportunity to play with the Jazznights Trio. Tonight no less than 5 musicians!

The great thing about Tommaso is that he offered to sit in with everyone, needless to say they all welcomed this. Firs up was Steve Laws on tenor sax and they played Charlie Mingus’s Nostalgia in Times

Square which worked so well with tenor and alto. Will Jarmin also sat in on drums. Will started playing drums at the age of 12 in 2001, since then he has played in numerous local bands and 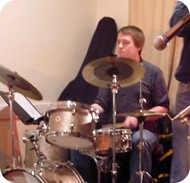 achieved grade 8 on the drum kit. After achieving a BA (Hons) in Music at Colchester Institute, Will is teaching and performing in various Jazz, Rock, Folk and Funk groups. Steve Laws (apart from being MC for the evening) runs Oakdene Music Services and repairs double basses and woodwind instruments but is also very capable of working with most bowed and acoustic instruments. Steve also teaches sax, flute, double bass and electric bass in different styles and ABRSM grades are available in both classical and jazz studies. 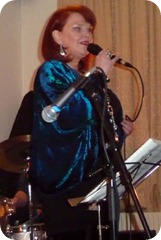 Karen Davies, a very talented East Anglian songstress sang Gershwin’s The Man I Love to great effect with her sultry style. Will again accompanied Karen on drums. Geoff Harriman on harmonica played Fly Me To The Moon. Geoff is 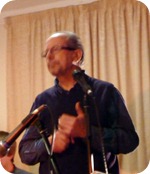 always a popular addition to a Jazznights evening.

Stella Goodey, a freelance jazz singer, songwriter based in East Anglia for the last 14 years and is

now living in France .  Stella headlined Lauzertes  Jazz Festival with Brian Dee in 2007, has recorded with John Petters, Ted Beament, Phil Brooke and Dave Newton and is the featured singer with The John Benson Jazzband. Stella sang Joni Mitchell’s Sometimes I’m Happy in B flat – we hope to see more of Stella at Jazznights when ever she comes back to England.

Tommaso opened his second set with the up-tempo bebop  standard composed by Charlie Parker in 1946 Yardbird Suite and featured solos from Simon Brown and Roger Odell on drums. Tommaso’s second number was Caravan which is

always associated with Ellington and is a jazz standard composed by Juan Tizol and first performed by the Duke in 1937. Tommaso used an amazing vibrato effect on his alto which fitted this number perfectly. Roger provide the driving beat and Bernie gave a great solo using all five strings of his double bass to great effect.

Next was a mid tempo number (still cannot remember the name!) which had Tommaso opening with an unaccompanied solo before featuring solos by Simon and Bernie. In the final number of the evening Tommaso asked Larraine Odell to join him. This was a particularly nice touch which just shows the gentleman that he is.Larraine chose Rodgers & Hart’s 1937 My Funny Valentine in G minor The two worked beautifully together and was a lovely ending to a truly wonderful evening.

For further information and future gigs go to www.jazz-nights.com

Rebop is a jazz repertory aggregation specialising in the arcane art of bebop and related music. Formed originally as a quintet to examine the repertoire of the modern jazz explosion circa 1944-1949

Rebop specialises in the innovative and exhilarating modern jazz that flowered in the mid-1940s in the hands of Charlie Parker, Dizzy Gillespie, Thelonious Monk, Miles Davis and other great jazzmen. Rebop Minus One are:

Kevin Flanagan comes from Lowell MA, USA. He has been involved in jazz and blues, both recording and performing. He settled in the UK

in 1985, playing with his own group and with musicians such as Dick Morrissey, Alan Barnes, Gerard Precenser, and Dave Cliff. He has made two successful CDs with Chris Ingham as the Flanagan-Ingham Quartet.
Colin Watling specialises in tenor sax and 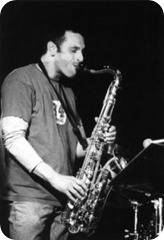 offers the full gamut of musical styles in his performances from soft and mellow, through to boppy and brassy….. and always in great humour. Colin is rated by many as one of the most exciting tenor saxophonists on the circuit with his melodic, swinging sound.
Chris Ingham trained as a drama teacher at Warwick University before succumbing to the music, he played guitar in misunderstood art ‘n’ b combo The Locomotives and was pianist/vocalist in the Flanagan Ingham Quartet who released two albums (Zanzibar and Textile Lunch) and were described by The Observer as ‘one of Britain’s most original bands’. He is jazz piano and jazz voice tutor at Anglia Ruskin University, Cambridge As an erstwhile music journalist he has contributed to Mojo magazine since 1996 and has published

three books; Billie Holiday, Rough Guide to the Beatles, and Rough Guide to Frank Sinatra.
Andrew James Brown is a minister of religion working in Cambridge UK inspired by the thinking of Epicurus, Lucretius, Spinoza, Nietzsche, Bloch, Wittgenstein and Heidegger and is a University Chaplain to Cambridge University, Anglia Ruskin University and a Police Chaplain for the Cambridgeshire Constabulary as well as being a highly respected professional jazz double-bass 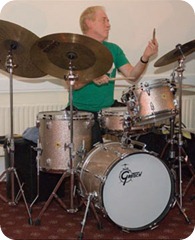 player.
Roger Odell was one of the founder members and drummer with the jazz-funk group Shakatak. Roger has toured internationally and recorded numerous CDs, which he continues to do on a regular basis to this day

Unfortunately due to our ill health we unable to attend this much awaited gig but with the help of Norman – a Jazznights stalwart and great supporter the following notes run through the nights program.

Resident Jazznights songbird opened the evening with three love;y songs namely:
The 1945 Rodgers & Hammerstein song – It Might As Well Be Spring, Bill Evan’s Some Other Time and I’m Old Fashioned, a 1942 song composed by Jerome Kern, with lyrics written by Johnny Mercer. Larraine was accompanied by Chris Ingham (piano) Andy Brown (double bass) and Roger Odell (drums). All arrangements were by Roger Odell

REBOP opened their set with Duke Ellington’s Cottontail  his famous 1940’s band with Jimmy Blanton on bass and Ben Webster on tenor sax recorded it on May 4, 1940. Arthur Arthur Schwarz’s 1932 Alone Together followed, both tenors getting full shares of the solos. A Ben Webster style version of Hank Mobley’s This I Dig Of You was again very wildly praised.

Clifford Brown’s Lover Man  was then followed by Vernon Duke’s 1934 Autumn In New York which many of us associate with Charlie Parker 1946 recording. Charlie Parker and Dizzy Gillespie’s Anthropology was next. All the Things You Are followed which was a song composed by Jerome Kern, with lyrics written by Oscar Hammerstein II. Again this tune is associated with Charlie Parker who was quoted as saying this song had his favourite lyrics. He used to call it "YATAG" which is an acronym for the lines "you are the angel glow" in the "B" part of the tune

The final number was an own composed medley of blues which although not officially titled, they just call B Flat Blues

This ended a wonderful evening by all – alas this did not include myself and that felt even worse when I read the great play list – thank you Norman.

There will not be a Jazznight on Sunday 26th December for obvious seasonal reasons but The Milan born Tommaso Starace, the  alto saxophonist’s star will be featured with the Jazznights Trio on Sunday 9th January 2011

For further information and future gigs go to www.jazz-nights.com