"There’s no question Clare is technically a most accomplished artist…a bracing voice with precise, fluid delivery. She can bend a note or hold a phrase as well as varying pitch and dynamics in the tradition of the very best in her trade…a considerable talent is at work here!"
Geoff Chapman (Jazz Critic – Toronto Star).

The Roger Odell Jazznights trio opened the evening with 5 excellent vocals from the resident songbird Larraine Odell. The trio were:

Roger was one of the founder members and drummer with the jazz-funk group Shakatak. Roger has toured internationally and recorded numerous CDs, which he continues to do on a regular basis to this day. 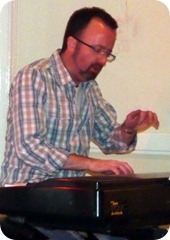 Simon Brown – piano
A very respected and popular jazz pianist who is equally known for his arranging skills. He is always in demand to play many gigs with other bands when he is not teaching jazz piano or playing with the  Jazznights Trio
Bernie Hodgkins – electric Bass
Inspired by an uncle, who played and recorded with Django Reinhart and Stephane Grappelli in the legendary Quintet de Hot Club

of France, Bernie grew up in a Jazz-oriented family. Their influence led him to become a respected bass player behind such people as Matt Munroe, Dickie Valentine and Dennis Lotus, in the early stages of his career. Bernie is particularly acknowledged as being one of the few players to bring an authentic, driving jazz feel to both the double bass and the bass-guitar, and for his fluent and creative soloing. Tonight Bernie was playing his bass guitar rather than his 5 string double  bass

Larraine Odell – vocals
Beginning her professional singing career with the group CMU with whom she recorded two albums, Larraine performed at numerous venues throughout the UK and Europe, including the Purcell Room, RFH, Boxford Fleece & Ronnie Scott’s. Larraine possesses a unique smouldering tonal quality and a subtle jazz phrasing style that has elicited great praise from two of her own vocal mentors, Mark Murphy and Sheila Jordan.

Larraine Odell opened with the 1940 All Or Nothing At All (Lyrics by    Arthur Altman and music by Jack Lawrence). An up-tempo version with a new arrangement by Roger Odell. The Thrill is Gone by Ray Henderson and Lyrics by Lew Brown followed with another superb slow arrangement by Roger featuring Simon Brown on the electric piano. Cole Porter’s 1938 Get Out Of Town came next with an up-tempo arrangement featuring both Simon Brown and Roger Odell.

Victor Young’s I Don’t Stand A Ghost Of A Chance With You with Lyrics by Bing Crosby and Ned Washington followed with a lovely slow tempo and great solo from Bernie with support on the drums using the brushes and cymbals to good effect from Roger. Larraine’s final number was an up-tempo version of Cole Porter’s Night And Day. For general information -  on November 29, 1932, Gay Divorce opened at the Ethel Barrymore Theatre. The show marked a departure for star Fred Astaire as it was his first appearance without his sister Adele. That night, teamed instead with Claire Luce, Astaire introduced Cole Porter’s “Night and Day.” Gay Divorce would continue for another 247 performances, distinguishing itself as Fred Astaire’s last Broadway appearance. All arrangements were by Roger.

Clare Foster opened with a medium tempo version of Johnny Mercer’s Accentuate The Positive and as a very pleasant surprise introduced Shanti Paul Jayasinha playing trumpet. Paul studied at the Guildhall School of Music and Drama and was featured soloist with Kenny Wheeler on the CD ‘Walk Softly’. In the 80s Paul toured with Tim Garland’s ‘Points on the Curve’ band, played with the Guildhall big band at Ronnie Scott’s with Randy Brecker, played with Jason Rebello, Cleveland Watkiss and Courtney Pine and discovered Afro-Cuban music with Roberto Pla. He  is also a regular member of Monica Vasconcelos’s Brazilian band. Clare’s second song was from Brazil and had the words: I Lost My Voice, I Lost My heart . For this Clare played a Brazilian Gobe drum similar to the Rebolo. 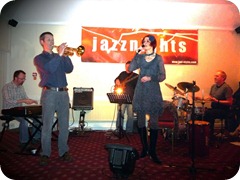 Clare then used a Clifford Brown tune to which she had added her own lyrics. This was a typical example of  Vocalese which is a style or genre of jazz singing wherein lyrics are written for melodies that were originally part of an all-instrumental composition or improvisation. Clare’s final number of the first set was Clare’s own version of Herbie Hancock’s transcription of the Gershwin’s Love Is Here To Stay. This was a medium tempo number featuring Simon Brown on keys.

After the interval we had the Jazznights raffle (prizes of 3 cd’s and a bottle of wine) leading into the traditional sitting in spot which is open to all musicians who have an  opportunity to play with the Jazznights Trio. First was our very own Geoff 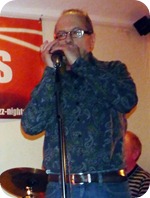 Harriman on Harmonica playing a medium tempo Satin Doll to great effect. Secondly we had the guest trumpet of Shanti Paul Jayasinha with a medium

tempo number which showed his skills as a musician to good effect.

Clare commenced her second set with an up-tempo Devil May Care followed by Cole Porter’s 1936 Easy To Love with Clare again playing the Rebolo with a samba rhythm. Paul again added to the number with his trumpet. Clare then sang Softly As In A Morning Sunrise (Music by Sigmund Romberg and lyrics by Oscar Hammerstein II). With opening 16 bars just Clare and Bernie on bass with Simon

and Roger joining in for the bridge. Back In Your Own Back Yard again with Paul on Trumpet with a very modernised arrangement by Clare.

An unusual song followed with vocalese Chin Ding Dong which is a Brazilian tune, the name coming from the sound that the Tambourine makes. Roger Odell excelled with a very strong and powerful Brazilian rhythm. Clare then finished with an up-tempo number ably supported by Simon on piano. An end to a great evening at Jazznights.

For further information on forthcoming gigs go to www.jazz-nights.com

The two January 2011 concerts were a sell out at High Barn, Gret Bardfield and were a huge success in a superb  venue with incredible acoustics (even Midge Ure said about High Barn "I want one"

Tracks from their forthcoming new CD "Across the Word were given their live premier as well as many of the old favourites such as: Night Birds, Day by Day, Dark Is The Night, Emotionally Blue, Afterglow and of course Down On The Street to end the evening to great applause and repeated encores.

Shakatak have enjoyed a level of success and career longevity rarely paralleled in contemporary music-but then Shakatak is a particularly unusual group. Because of the nature of their music,their fan base is one that is far reaching while always retaining an ‘underground element’.This paradox sees the band,who are known primarily as serious jazz/funk musicians,enjoying both high ‘cult’ status and instant recognition as a household name

flute and backing vocals). All producing a musically dynamic and entertaining show from the 6 piece line-up.

"Shakatak aren’t just a band, they were the soundtrack to our lives" RONNIE SCOTT’S HOUSE MAGAZINE (UK) 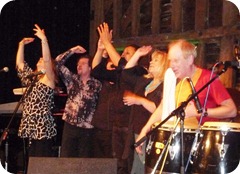 A fabulous gig with superb acoustics and a great sound – as