“Within a few notes you know you’ve hit a jackpot with Estelle Kokot…an indefinably mature combination of meticulously well-chosen notes and a voice to strip you down bare and trembling. With enviable grace and confidence she balances her voice and her piano work and displays her musical wares with such panache you could hear a crotchet fall”. Gisele Turner – JazzEye.

Estelle Kokot was nominated for a South African Music Award (SAMA) in the ‘Best Jazznights Estelle Kokot 200211 (23)Jazz Vocal’ category and she followed this with a nationwide tour. “Estelle Kokot is an exceptional talent..” Timeout. “Standards and originals perfectly compatible side by side…compelling, haunting, passionate…” The Guardian.

“Estelle Kokot is a powerful, soulful and independent artist. Kokot’s is a personal, unselfconscious talent… her music is often vividly surprising, and unquestionably all her own.” John Fordham – The Guardian

“…standards and originals perfectly compatible side by side , Kokot is an excellent arranger of her own and other peoples’ material… compelling, haunting, Jazznights Estelle Kokot 200211 (25)passionate…” The Guardian

‘Her soft complexion suggests the gentle soul that lies within, yet belies her capacity for the random one liners and double entendres which punctuate the evening, however, there is no confusing the issue that music and her rendering of it are the stars of the show’ Cape Town Sunday Times

‘Kokot ousts the singer while colonising the song, a deep magenta voice with a built in echo.’ (Business Day Johannesburg)

“Kokot’s sound is rooted in the passionate dynamism of the townships, mingled with a defiant soulfulness that sometimes unexpectedly echoes Annie Lennox. She is also an excellent arranger of her own and other people’s material. She draws together originals and jazz classics, reshaping them to sound perfectly compatible side by side.” The Guardian

Unfortunately the writer was unable to attends the gig so this report is without new pictures and is based on notes from Jazznights good friend Norman.

Simon was be playing with the Roger Odell Jazznights Trio and vocalist Larraine Odell who were:

Roger Odell – Drums
Roger was one of the founder members and drummer with the jazz-funk group Shakatak and the forerunner band Tracks. Roger has toured internationally and recorded numerous    CDs, which he continues to do on a regular basis to this day. Apart from a great power   drummer he is also a prestigious arranger. Musically, his first love was always straight-ahead contemporary jazz, and in the past he has played with many of the great names on the UK scene including Don Rendell, Barbara Thompson, Dick Morrissey, Terry Smith, Joe Harriott and countless others. Roger is the author of three technical articles which appeared in the international magazine Modern Drummer.
Bernie Hodgkins – Double Bass Inspired by an uncle, who played and recorded with 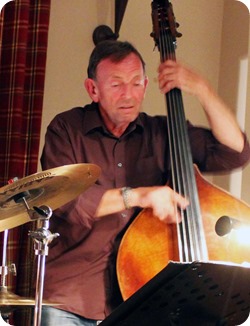 Django Reinhart and Stephane Grappelli in the legendary Quintet de Hot Club of France,Bernie grew up in a Jazz-oriented family.Their influence led him to  become a  respected bass player behind such people as Matt Munroe,Dickie Valentine and Dennis     Lotus, in the early stages of his career. Bernie is  particularly acknowledged as  being one of the few players to bring an authentic, driving jazz feel to both the double bass and the bass-guitar, and for his fluent and creative soloing. Tonight Bernie was playing his 5 string double bass with the extra C string.
Sam Edwards – Piano
Sam was born in London in 1970 to a musical family; his mother and sister both are professional musicians. Sam studied classical music at the Colchester institute for 2 years from 1986 where he attained grade 8 Piano, grade 8 theory of music and two ‘A’ levels (Theory and Practical) in music. Sam then graduated with a 1st in Jazz and Contemporary 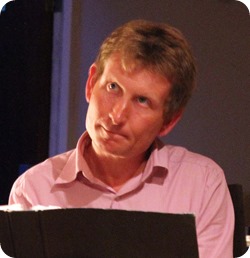 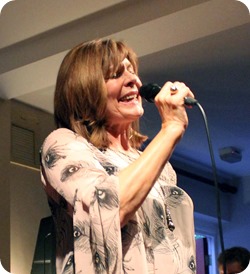 albums, Larraine performed at numerous venues throughout the UK and Europe, including the Purcell Room, RFH.  Boxford Fleece & Ronnie Scott’s.Larraine possesses a  unique smouldering tonal quality and a subtle jazz phrasing style that has elicited great     praise from two of her own vocal mentors, Mark Murphy and Sheila Jordan. “A sensitive   singer who exudes a fine-honed jazz sensibility with every phrase.” She has since appeared at Ronnie Scott’s Club as a member of the group Jimpster, at the Boxford Fleece with pianist Steve Lodder, most of the other jazz clubs in the region, and at the Aldeburgh, Layer Marney and Southwold Jazz Festivals.

2. Gentle Rain by Luiz Bonfa featured on The Movie Song Album, a 1966 studio album by Tony Bennett
3. I Could Write a Book (1940) – Music    from Richard Rodgers and Lyrics by Lorenz Hart
4. Close Enough for Love a 1979 jazz standard. It was composed by Johnny Mandel with lyrics by Paul Williams
5. Misty (1954) Music by Erroll Garner and Lyrics from Johnny Burke. (In 1954 the Erroll Garner Trio introduced the instrumental “Misty.” A year later Johnny Burke penned the lyrics)

Estelle Kokot then joined the Jazznights Trio singing:
6. I’ve Got the World on a String (1932). This Ted Koehler-Harold Arlen number was introduced in the 21st edition of the Cotton Club Parade, which opened on October 23, 1932. Cab Calloway’s orchestra, featured in the revue, had a hit on the charts with the number that year
7. Composer Jule Styne and lyricist Sammy Cahn wrote I Fall in Love Too Easily for the 1945 film Anchors Aweigh which was a big success for the MGM studio and Frank Sinatra
8. See You On Sunday was an Estelle Kokot 2006 original composition and featured on her 2007 album – Information
9. Honeysuckle Rose was introduced as a dance number in the 1929 revue, Load of Coal, by its composer, Thomas “Fats” Waller. Lyrics by Andy Razaf 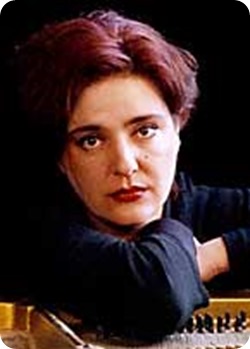 5. Following the interval and the Jazznights raffle of 3 jazz cd’s and 2 bottles of wine we had  the traditional Jazznights sitting in spot  which is open to all musicians who have an  opportunity to play  with the band. Tonight we had the pleasure of Cal Finnegan (brother of Judy Finnegan, of Richard and Judy fame) who came over from France especially for Estellle and played piano on Dave Brubeck’s The Duke

6. Estelle Kokot then returned for a solo piano and vocal performance of (I Would Do) Anything for You (1932) Words and Music Alex Hill and Claude Hopkins
7. The band the re-joined Estelle for Autumn Leaves, a much-recorded popular song. Originally it was a 1945 French song Les feuilles mortes (literally “The Dead Leaves”) with music by Hungarian-French composer Joseph Kosma and lyrics by poet Jacques Prévert,
8. I’m Beginning to See the Light – In 1944 bandleaders Duke Ellington and Harry James collaborated with alto saxophonist Johnny Hodges to develop this melody into the hit song with a lyric by Don George
9. Round Midnight is a tune written by the great innovative pianist Thelonious Monk. Monk claims that he composed Round Midnight when he was 18 and eight years later, Cootie Williams recorded it with his orchestra. Lyrics by Bernie Hanighen
10. A Felicidade words and music by Antonio Carlos Jobim and Viniciusde Moraes
11. A fantastic finale from Estelle with Charlie Parker and Dizzy Gillespie’s 1946 Anthropology.
The whole gig was described as “Brilliant!”

EMILY DANKWORTH (vocals) will be returning to Jazznights on the Sunday 2nd Mar
Given her musical background – Grandaughter of Cleo Laine and John Dankworth, and daughter

of Alec Dankworth – it is no surprise that Emily has her forte in Music. In her career now as a solo singer she has performed at the Barbican, The Stables Theatre, Ronnie Scotts Jazz Club, The Vortex Jazz club, The Pizza on the Park, Warwick Arts Centre and Winchester Cathedral.

For further information, future gigs and location go to www.jazz-nights.com