Since arriving in the UK in 2003 Maciek has quickly established himself as an up-and-coming artist and has toured the UK, USA and Europe with his project and as a sideman to some well known international artists

He mainly plays acoustic and classical guitars and his influences come from Tango, Flamenco, Latin, Jazz, Brazilian and Classical music.

Maciek Pysz is originally from Poland and currently based in London. He has been playing guitar for over 16 years and has studied jazz, latin and classical music. Arriving in the UK in 2003 he quickly established himself as an up-and-coming young guitarist and has toured 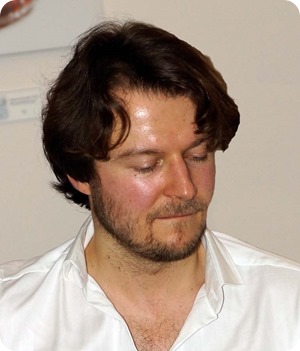 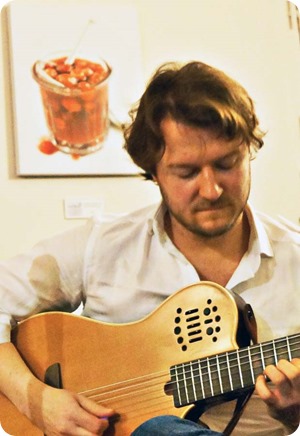 Maciek’s improvisational and accompanying style is quite unique as it’s a combination of many influences coming from the jazz, Spanish, classical and Brazilian guitar traditions. He is able to improvise using chords and melody and sometimes detunes the sixth string of his guitar both to accompany himself while playing solo and to accompany others

He mostly plays using a pick and alternate picking style but also by finger picking, on both nylon and steel string guitars. Very often he uses both techniques on the same tune. He has never used many digital effects and produces all the sounds by himself using guitar’s natural palette of sounds

Maciek Psyz played at Jazznights with:
Alex Best – Drums
After achieving his music degree and studying with the likes of Troy Miller (Mark Ronson, Amy 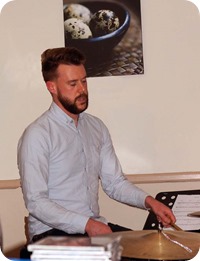 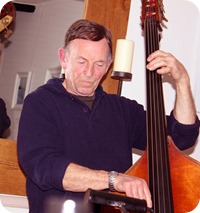 Bernie Hodgkins – Double Bass Inspired by an uncle, who played and recorded with Django Reinhart and Stephane Grappelli in the legendary Quintet de Hot Club of France,Bernie grew up in a Jazz-oriented family.Their influence led him to  become a  respected bass player behind such people as Matt Munroe,Dickie Valentine and Dennis     Lotus, in the early stages of his career. Bernie is  particularly acknowledged as  being one of the few players to bring an authentic, driving jazz feel to both the double bass and the bass-guitar, and for his fluent and creative soloing. Tonight Bernie was playing his 5 string double bass with the extra C string.
Simon Brown – Piano
Simon’s piano playing has long been the sound accompaniment of first choice for nationally and internationally known jazz stars appearing at Jazznights as well as Norfolk’s two leading 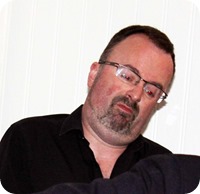 jazz venues, He is also an accomplished soloist in his own right, blending  vivacity and creative attack with often gentle lyricism.  His influences are Oscar Peterson,  Nat “King” Cole and Bill Evans. Since graduating from the University of East Anglia (UEA) in  1990,  Simon has worked as a performer, teacher of piano and music arranger and regularly appears at the most popular jazz clubs in East Anglia. His involvement in Blues, Jazz and Jazz-Funk combos have led to appearances at many jazz festivals and has shared the billing with the likes of Jools Holland, The James Taylor Quartet, Stacey Kent and Bobby Wellins apart from his regular performances as a primary member of the Jazznights Roger Odell Trio.
With additional vocals from:
Larraine Odell – vocals 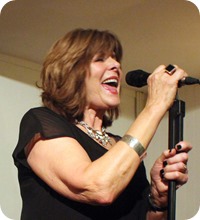 Beginning her professional singing career with the group CMU with whom she recorded two albums, Larraine performed at numerous venues throughout the UK and Europe, including the Purcell Room, RFH.  Boxford Fleece & Ronnie Scott’s.Larraine possesses a  unique smouldering tonal quality and a subtle jazz phrasing style that has elicited great     praise from two of her own vocal mentors, Mark Murphy and Sheila Jordan. “A sensitive   singer who exudes a fine-honed jazz sensibility with every phrase.” She has since appeared at Ronnie Scott’s Club as a member of the group Jimpster, at the Boxford Fleece with pianist Steve Lodder, most of the other jazz clubs in the region, and at the Aldeburgh, Layer Marney and Southwold Jazz Festivals.

Maciek Psyz gave us a great first set which included:
Little Sunflower is a tune written by the great trumpeter Freddie Hubbard off of his 1967 album Backlash. This is a modal tune based around the key of D minor.
Fresh Look is a composition by Maciek which will be featured on his next album and will be 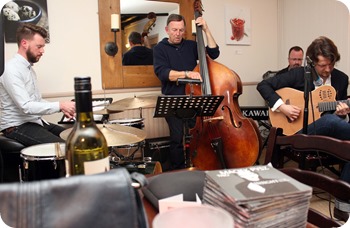 released on 33Jazz later this year.
Amici,” co-written by Pysz and guitarist Gianluca Corona and featured on his latest album Insight which is a superb album that readily conjures images of warm, sun-kissed landscapes.

Following the Jazznights raffle for 3 jazz CDs and a bottle of wine Larraine Odell joined the band to sing a stunning version of But Beautiful Music    Jimmy Van Heusen and Lyrics from Johnny Burke. (Bing Crosby introduced “But Beautiful” in the fifth “Road” film that he made with Bob Hope and Dorothy Lamour. Road to Rio in 1948)
Maciek Psyz then continued with just the trio for:

Walking on the Moon is a 1979 song by The Police composed by Sting, from their second album, Reggatta de Blanc. The song was The Police’s second number-one hit single in the U.K.
Spain is an instrumental jazz fusion composition by jazz pianist and composer Chick Corea. It is probably Corea’s most prominent piece, and is now considered as a modern jazz 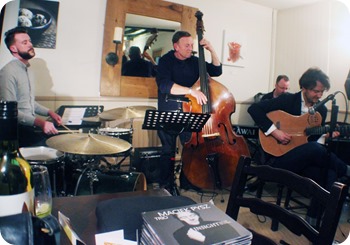 standard.
Stella By Starlight composed by Victor Young and introduced in the 1944 Paramount film, The Uninvited. Charlie  Parker was responsible for making the first recording of it in a jazz context in January, 1952
Estate (meaning Summer) is an Italian song written in 1960 by Bruno Martino (music). A minor hit in Italy when released, it eventually became a worldwide jazz standard largely through its interpretation by João Gilberto.
I t may be considered a relatively short play list bit these were superb extended versions played by a master of the guitar very ably  supported by the Jazz Nights Trio. Alex Best stood in for our regular drummer Roger Odell who was playing in South Africa with Shakatak this evening.

Our thanks to Colin Attenborough for the additional photographs.

Anita’s singing is exciting and breath-taking. She is noted for her mesmerizing and captivating vocal improvisations and vocalese lyrics to instrumental solos. She is a musician who uses the voice as her instrument, displaying precision and agility, mixed with heartfelt emotion. Anita has been voted Best Vocalist in the 2013 British Jazz Awards.