Founding member of 80s pop group Shakatak, Keith Winter from Littlebury, could not play a chord for almost 20 years because of a rare nerve disease, but following an “inexplicable” recovery he is now preparing to go back on stage.

“My auto-immune system went into overload and wiped out my own nerve cells,” said the 52-year-old musician. “The disease was so rare that it didn’t even have a name. The doctors couldn’t help at all.  “To lose the use of your hands is a guitar player’s worst nightmare – I couldn’t even tie a shoelace. I was always in danger of falling over and I became housebound; it was like I couldn’t coordinate my body.”

Jazz-funk band Shakatak shot to fame in 1980 and the band’s singles and albums regularly entered the charts throughout the decade including the hits “Night Birds” and “Down on the Street”.  An established international act, Shakatak had success across Europe, the Far 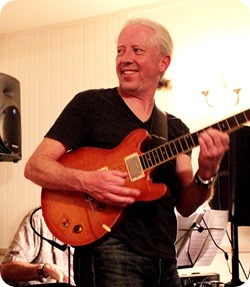 East and North America picking up numerous accolades and awards along the way.

As the electric guitarist Keith was a key component of the band’s success, but as the decade drew to a close, and still only in his early 30s, his health began to deteriorate. “I sold some lovely guitars because I didn’t think I would play again – there was a time when I couldn’t play a note or even hold a plectrum,” said Keith. “The doctors all said I wouldn’t improve, but I never gave up hope or saw myself as disabled.

“Then, about two years ago, I started making an inexplicable, but drastic, recovery. I went to see the consultant at Addenbrooke’s Hospital and he was dumbfounded, his jaw hit the floor.”  Keith’s condition started to improve as his daughter, Cara Winter – a musician in her own right – started to establish herself as an artist. Performing low-key gigs with his daughter has helped Keith to rebuild his guitar-playing skills.

“Having about 18 years out is quite a gap, but my hands are improving all the time,” said Keith. “As for how well I’m playing, you’d have to ask the audience that!”

Following his recovery, Keith began searching for a new guitar to replace his original  instruments and came across a Martyn Booth Signature guitar. Immediately, he felt at home, and, given his medical history, was struck by how easy and comfortable it was to play, allowing him to just relax and get on with the music. After further investigation and a test run Keith also fell in love with the sound of these custom made guitars – he is now the proud owner of a Honeyburst signature of his own!

This guitar he played with great aplomb for a stunning gig at Jazznights on the 10th May 2015. Keith played with the Roger Odell Trio who were:

Roger Odell – Drums
Roger was one of the founder members and drummer with the jazz-funk group Shakatak and the forerunner band Tracks. Roger has toured internationally and recorded numerous CDs, which he continues to do on a regular basis to this day.

Peter Lemer – Piano
He studied at the Royal Academy of Music and included Tommy Rajnaand Sven Weber among his classical coaches.  In 1969, he worked with the Spontaneous Music Ensemble. In the last few years, Lemer has remained a fixture of In Cahoots – he can be heard on Parallel (1996), Out Of The Blue (2001), All That (2003) and Conspiracy Theories (2006), most of which also feature his writing – as well as playing one-off gigs with old friends Steve Cook (bass) and Roger Odell (drums), recording an album with them in Israel. 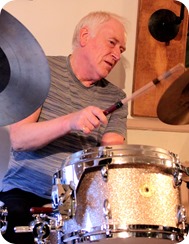 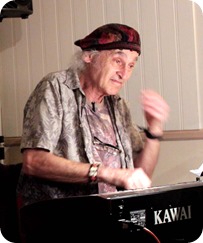 Bernie Hodgkins – 5 String Double Bass
Bernie grew up in a Jazz-oriented family and has toured in Europe and further afield with a wide variety of artists and  honed his skills and adding to his prodigious repertoire. Spending much of his time in the recording studios, he is equally at home and in demand as an enthusiastic “live” rhythm section player

Larraine Odell – Vocals
Beginning her professional singing career with the group CMU with whom she recorded two albums, Larraine performed at numerous venues throughout the UK and Europe, including the Purcell Room, Royal Festival Hall. Boxford Fleece & Ronnie Scott’s. 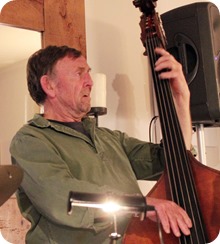 The film Broadway Melody of 1940 introduced I Concentrate on You written by Cole Porter.
Artie Shaw’s Moonray from 1936.
Bing Crosby introduced But Beautiful in the fifth “Road” film Road to Rio that he made with Bob Hope and Dorothy Lamour in 1948.
In 1954 the Erroll Garner Trio introduced the instrumental Misty. A year later Johnny Burke penned the lyrics, creating the song we know today.

Keith Winter then joined the band to play extended versions of:
Richard Rodgers 1959 My Favorite Things.
George Benson’s El Mar from his 1971 White Rabbit album.
Bright Size Life is tune from Pat Metheny’s debut album, released in 1976 on ECM, when Metheny was only 21. The album features Jaco Pastorius on bass and drummer Bob Moses but this was a a superb rendition by Keith, Roger, Peter and Bernie.

Following the Jazznights raffle of 2 jazz cd’s and a bottle of wine we had the traditional Jazznights sitting in spot which is open to all musicians who have an  opportunity to play  with the band. Tonight we had Stuart Pringle sitting in for Roger and playing with Keith  and the rest of the band playing Pat Metheney’s Phase Dance from his 1978 album of the same name.

Footprints is a jazz standard composed by Wayne Shorter, first appearing on his 1966 album Adam’s Apple.
On April 30, 1935, Duke Ellington and His Orchestra introduced In a Sentimental Mood.
So May It Secretly Begin composed by Pat Metheny from the Still Life (Talking) album.
Maiden Voyage is a jazz composition by Herbie Hancock from his 1965 album Maiden Voyage.
Blue Bossa is an instrumental jazz composition by Kenny Dorham. It was introduced on Joe Henderson’s 1963 album Page One.

Nardis is a composition by American jazz musician Miles Davis. It was written in 1958, during Davis’s modal period, to be played by Cannonball Adderley for the album Portrait of  Cannonball. The piece has come to be associated with pianist Bill Evans, who recorded it repeatedly.
Mr P.C. is a 12 bar minor blues composed by John Coltrane in 1959. The song is named in tribute to the bass player Paul Chambers who had accompanied Coltrane for years and what a fabulous finale this was to conclude a really great night.

Perhaps best known for his work as the compelling counter-voice to singer and wife, Stacey Kent, Jim Tomlinson is increasingly recognised as a distinctive saxophone voice in his own right. His latest CD, The Lyric, features Stacey extensively and is the first release on his own record label, Token, winning ‘Album of the Year ‘ at the BBC Jazz Awards.

For further information on future gigs go to www.jazz-nights.com