Rebop’s Kevin Flanagan and Colin Watling feature in a “Battle of the Saxes” brought to mind the famous saxophone duets of John Coltrane/Sonny Rollins and Eddie “Lockjaw” Davis/Coleman Hawkins. This proved to be a night of hard swinging fireworks from these two brilliant musicians in a programme drawn from the classic 40’s to 60’s period of modern jazz.Tenor Madness features the tenor saxophones of Kevin Flanagan & Colin Watling with a great rhythm section of PETER LEMER (keys), BERNIE HODGKINS (bass) & ROGER ODELL (drums)

Kevin Flanagan comes from Lowell MA, USA. He has been involved in jazz and blues, both recording and performing. He settled in the UK Kevin Flanagan Rebop Jazznights 180410 (7)in 1985, playing with his own group and with musicians such as Dick Morrissey, Alan Barnes, Gerard Precenser, and Dave Cliff. He has made two successful CDs with Chris

Ingham as the Flanagan-Ingham Quartet.

Kevin comes from Lowell, Mass., USA. He initially studied music and philosophy at the University of New Hampshire, and was part of Antares, a free improvisatory group that toured the New England through the mid-70s to early 80s. During this period he was also involved in jazz, blues, and popular music, both recording and performing. He settled in the UK in the mid-80s, and worked on the London jazz and pop scene, playing and recording with members of Pink Floyd, Ben E. King, the Sex Pistols, Jools Holland, Led Zeppelin, B.B. King, Portishead, and many others. By the late 1980s he was primarily involved with jazz, playing with his own )group or with musicians such as Dick Morrissey, Alan Barnes, Dave Newton, Gerard Precenser, Don Weller, Dave Cliff, Mark Edwards, Adrian Utley, and the Tommy Chase quartet around the festivals of the UK and Europe.

Colin Watling specialises in tenor sax and offers the full gamut of musical styles in his performances from soft and mellow, through to boppy and brassy….. and always in great humour. Colin is rated by many as one of the most exciting tenor saxophonists on the  circuit with his melodic, swinging sound. He is a mainstay of the region’s jazz scene, the Hertfordshire-based tenor sax colossus.

The two tenors played with the Jazznights Trio who were: 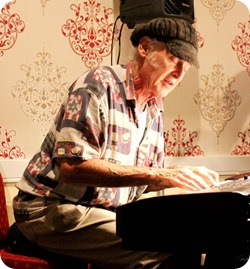 leader (Local Colour) in 1996, the band by then including Jon Hiseman, John Surman, George Khan and Tony Reeves. A year in New York followed, which included extensive jamming, gigging and study. Coaches included famed jazz pianists Jaki Byard and Paul Bley and Double Bass guru David Walters. He also studied at the Royal Academy of Music and included Tommy Rajnaand Sven Weber among his classical coaches. In 1969, he worked with the Spontaneous Music Ensemble. In the last few years, Lemer has remained a fixture of In Cahoots – he can be heard on Parallel (1996), Out Of The Blue (2001), All That (2003) and Conspiracy Theories (2006), most of which also feature his writing – as well as playing one-off gigs with old friends Steve Cook (bass) and Roger Odell (drums), recording an album with them in Israel. 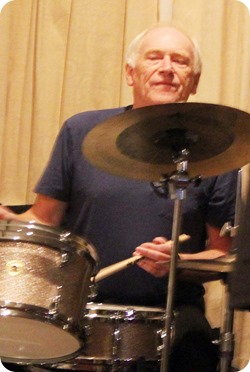 As one of the founder members and drummer with the jazz-funk group Shakatak, Roger has toured internationally and recorded numerous CDs, which he continues to do on a regular basis to this day.
Musically, his first love was always straight-ahead contemporary jazz and he has played with most of the great names on the UK jazz scene.He recently produced his own critically acclaimed CD “The Blue Window” by Beatifik, which featured top UK saxophonist Mornington Lockett. Jacqui Hicks and Larraine and a new Beatifik album is due to be  released in November
Roger is the author of three technical articles which appeared in the international magazine Modern Drummer, and is an Endorsee Artist for Sabian Cymbals, Vic Firth Sticks and Hardcases

Bernie Hodgkins – Double Bass
Inspired by an uncle, who played and recorded with Django Reinhart and Stephane Grappelli in the legendary Quintet de Hot Club of France, Bernie grew up in a Jazz-oriented family. Their influence led him to become a respected bass player behind such people as Matt Munroe, Dickie Valentine and Dennis Lotus, in the early stages of his career.

Touring in Europe and further afield with a wide variety of artists honed his skills and added to his prodigious repertoire. Supports to players like John Scofield, and singers such as Annie Ross always proved inspirational and served to reinforce his enduring love affair with jazz.
Spending much of his time in the recording studios, he is equally at home and in demand as an enthusiastic “live” rhythm section player, as is testified by his work with Don Rendell, Jack Parnell, George Chisholm, Pete Jacobson, John Etheridge, Kenny Baker, Allan Skidmore, Dave O’Higgins and many others.

Tenor Madness opened the evening with a stunning display of of the best in British Jazz playing extended version of some of the great jazz classics including Sugar,Bernie’s Tune,Nostalgia in Times Square, Green Dolphin Street, Alone together, Straight No Chaser with Colin Watling giving a solo set of Body & Soul with Kevin Flanagan showing his expertise playing My One & Only Love. 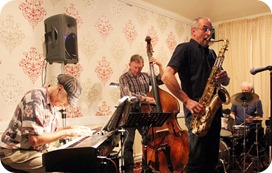 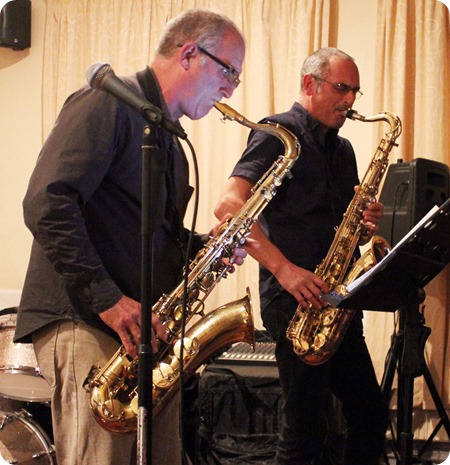 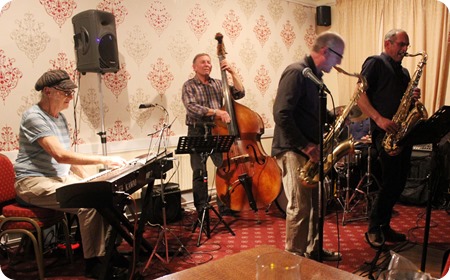 As Gareth Williams-James our MC pointed out the only madness should be deserved for all those who did not come to this stupendous gig by five master musicians including two tenor giants.

In the five short years of his professional life Pete Roth has played in some of the best venues in Europe including the Purcell Room at the Royal Festival Hall and he has appeared on the same bill with one of his heroes John Schofield. On his new CD “Meridian” he is joined by Jazznights favourite Nicolas Meier.

THE BEST IN BRITISH MODERN JAZZ is at  Jazznights, Clare, Suffolk.

Danish guitarist, composer and bandleader, Kristian Borring, has been described as a “guitarist of enormous technical ability who utilizes his considerable gifts thoughtfully and tastefully, a highly accomplished guitarist and composer.” – The Jazz Mann

Kristian’s debut album, Nausicaa – a reference to Odysseus’ journey in Homer’s “The Odyssey” – was released in 2011 on Italian label, Ultra Sound Records, and featured New York based alto saxophonist, Will Vinson. It received wide spread national acclaim and was described by John Fordham (The Guardian) as a “hyper-cool and low-key approach to jazz 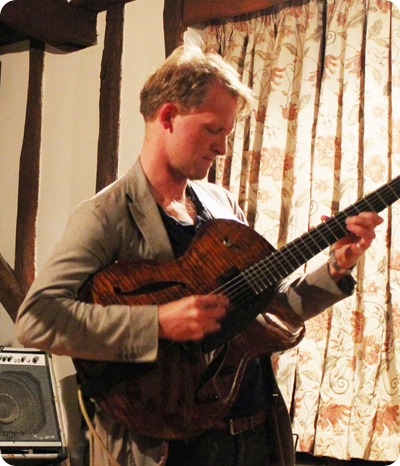 Kristian studied jazz guitar at Conservatorium Van Amsterdam in The Netherlands and Guildhall School of Music in London.

“This is a guitarist who eschews histrionics, Borring’s is an understated virtuosity and he favors a pure, clean sound.” – The Jazz Mann

“His guitar work, like the overall feel of the music, is clean, cool, precise and 1 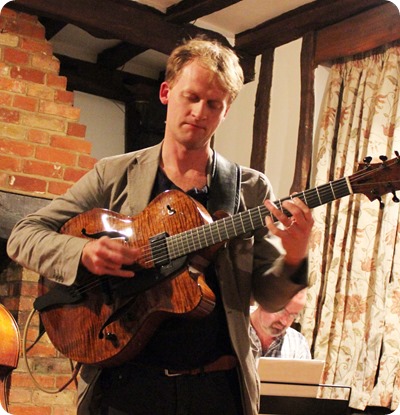 “The tunes though complex knit well together and there is a convincing clarity to the improvising thought processes at work that represents a strong statement of intent from an artist we’ll be hearing a lot more from with any luck in the future.” – Marlbank

“Although unfailingly melodic this is also highly sophisticated music that is well served by Borring’s undemonstrative approach.” – The Jazz Mann

“Borring is an accomplished but determinedly unflashy player, firmly rooted in the jazz tradition of his instrument.” – LondonJazz

We at Jazznights can now totally endorse the comments that have previously been stated.

Kristian Boring played with the Roger Odell Jazznights Trio who were:

Roger Odell – Drums
Roger was one of the founder members and drummer with the jazz-funk group Shakatak and the forerunner band Tracks. Roger has toured internationally and recorded numerous CDs, which he continues to do on a regular basis to this day.

Leading UK Jazz innovator and musical entrepreneur Simon Brown is a highly respected and popular jazz pianist who is equally known for his arranging skills. His bands include the  quintet Beyond Cantaloupe featuring the music of Herbie Hancock, as well a the very popular Simon Brown Trio and Quartet.  He is also a stalwart of the Jazznights Trio with Roger Odell and Bernie Hodgkins. 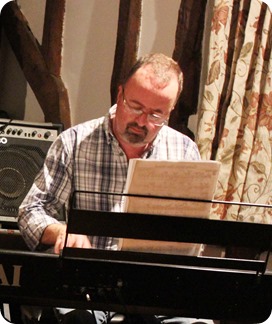 Bernie grew up in a Jazz-oriented family and has toured in Europe and further afield with a wide variety of artists and  honed his skills and adding to his prodigious repertoire. Spending much of his time in the recording   studios, he is equally at home and in demand as an enthusiastic “live” rhythm section player.

Larraine began her professional singing career with the group CMU with whom she recorded two albums, Larraine performed at numerous venues throughout the UK and Europe, including the Purcell Room, Royal Festival Hall. Boxford Fleece & Ronnie Scott’s

Kristian Borring then joined the Roger Odell Jazznights Trio to play superb versions of the best in guitar renditions.

Following the interval and the Jazznights raffle of three Jazz CDs we had  the traditional Jazznights sitting in spot  which is open to all musicians who have an  opportunity to play  with the band. Tonight we had the pleasure of Geoff Harriman playing his harmonica and Graham Cullen on the drums playing Fly Me To The Moon. 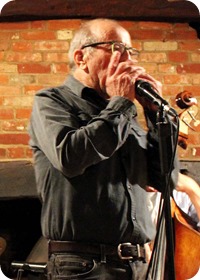 Kristian Borring then re-joined the band for the second set. 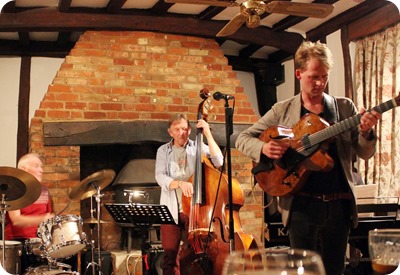 Kristian Borring gave us a wonderful evening of superb melodic jazz orientated splendour which was endorsed by the very appreciative audience.

On Sunday the 27th September 2015 Jazznights welcomes the return of Tenor Madness.  Tenor saxophonists Kevin Flanagan and Colin Watling combine in a “battle of the saxes” influenced by the famous duets of John Coltrane & Sonny Rollins and Eddie “Lockjaw” Davis & Johnny Griffin. Hard swinging, straight ahead modern jazz from these two masters of the saxophone.

THE BEST IN BRITISH MODERN JAZZ is at  Jazznights, Clare, Suffolk.