London based Saxophonist Chris Rand grew up on the south coast of Dorset. He moved to London to study at the Guildhall School of Music. Chris quickly became one of the UK’s top saxophone side men playing and recording throughout the world with many of UK’s top Jazz and Blues artists.
Dan Banks, Bernie Hodgkins, Chris Rand & Roger Odell

Chris has performed with the Rolling Stones Charlie Watts and Ronnie Wood, and has performed as guest artist with George Porter Jr (The Meters) and Guitarists Mick Taylor and Chris Jagger. Chris has also performed together with guitarist Elliot Randall (Steely

Dan, Blues Brothers) as well as Sax player Davey Payne (Ian Dury and the Blockheads). Chris has also been part of the Bad Manners crew, performing at

festivals in the UK, Spain and Russia. He is also been a part of the Ben Waters Band for many years, and most recently, Chris has been working with British blues band Nine Below Zero, where he made his first appearance this year with the band at Glastonbury Festival.

In 2014 Chris formed his own quartet “The Chris Rand Quartet” as a vehicle for his own compositions. January 2016 will see the world wide release of his Debut CD

“Gathering” (Dot Time Records DT9047). The CD features a series of original compositions influenced by all the various styles Chris has been inspired from over the years. Guesting with Chris on “Gathering” is Derek Nash, Dave Green and Ben Waters!

Chris played with the Jazznights Trio who were

Sunday 14h April – Atila (vocals) will be at Jazznight 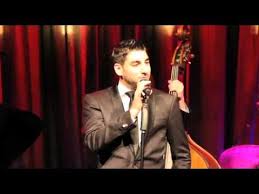 Atila started his professional career with the National Youth Jazz Orchestra and he is now an established Jazz singer in the UK. Sartorially stylish and musically classy, his interpretations of the American Songbook take influence from early Frank Sinatra. “I was very impressed with his singing, he has a real feel for the lyric” Sir Michael Parkinson.
2018

THE BEST IN BRITISH MODERN JAZZ is at Jazznights,
The Bell Hotel. Clare, Suffolk. CO10 8NN

For further information on future gigs go to www.jazz-nights.com